We appreciate Hallie's sweetness, excellent "motor", and energetic nature ... and most people comment immediately on her cute face.  You can't ride a face, but we do have to admit it's cute ... and Hallie uses "cute" to her advantage whenever she can!  Hallie has superior athletic abilities, and loves to demonstrate that.  Hallie is also extremely sensitive, and very bright.  You know that person who excitedly finishes all your sentences for you, sometimes incorrectly?  That's Hallie!

Hallie came to us as a green trail horse with some known, disclosed issues and two prior offspring to her credit. Hallie obviously loves being a mom and having someone to look out for; she immediately took Linus under her wing.  Alas, poor Hallie — we only breed our mares in even numbered years, and she arrived too late in 2020 to be bred in sync with Winny and Willow.

A huge surprise to everyone (except maybe Hallie) was discovering that Hallie had some hidden issues with tasks she already knew, starting with backing out of a trailer.  Our "getting acquainted" time in late 2020 was filled judiciously with successful diagnostic and remedial lessons, but none of the trail time we'd been told that Hallie would need ... and in the process, our last stretch of good riding weather during our mares' pre-maternity leave riding window evaporated.  This left us with a dilemma.  We didn't want to take Hallie out on the trail with Yamsi, who still needs a confident mentor himself.  We also didn't feel we had enough time to adequately train two new foals and Hallie later in 2021.  Fortunately a solution presented itself —Hallie went to Dungård in Feburary 2021 on a broodmare lease with additional training under saddle as part of the agreement — trail time (including ponying youngsters in the mountains), dressage, and jumping.

The end result of Hallie's additional trail miles and assessment during 2021 was that we were told Hallie is still tense and nervous on the trail; the details of the assessment fell in line with what we had already observed about Hallie on our own few rides, albeit dialed back and vastly safer now.  It's clear to us that Hallie really isn't ever going to be happy as a trail horse at all ... and trail riding is what we do here.  Although we are owed a breeding for Hallie as part of the broodmare lease agreement, we've decided it's more important to facilitate helping Hallie find a truly suitable, long-term partner instead of getting that foal from her ourselves.

Hallie has also now had some basic dressage training, and has been introduced to jumping, which she enjoys.  Hallie likes being a mom, and would be happy to just be a broodmare, too.  However, Hallie has a history of "forgetting" her training during any time off, so she isn't going to be satisfactory in any sporadic or seasonal riding situation; if she is an occasional broodmare, all indications are that refresher training will be necessary after each layoff for foaling.

Hallie is confirmed in foal to OFI Siljar for 2022; that foal will be owned by Dungård

Trimmed down and in training! 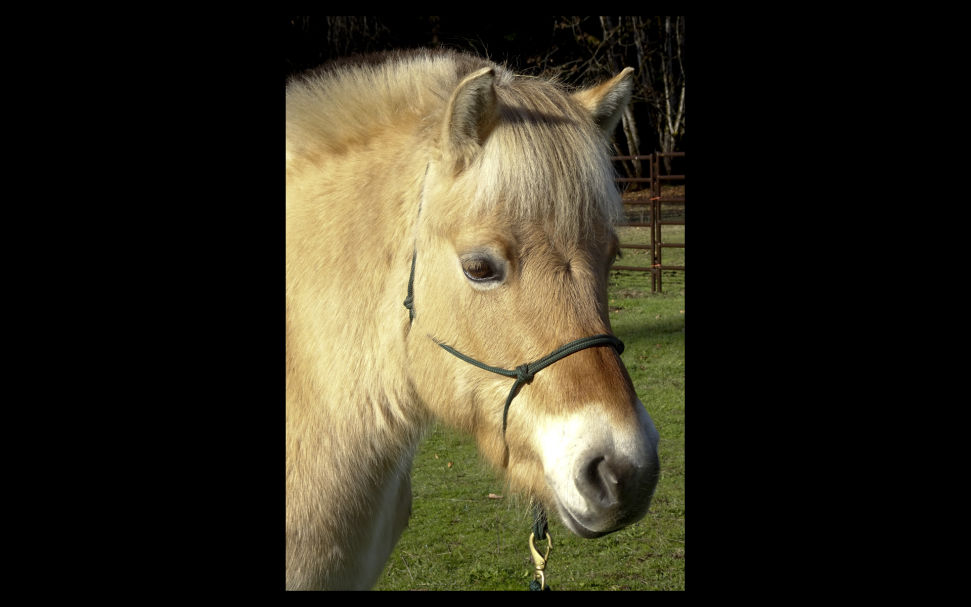 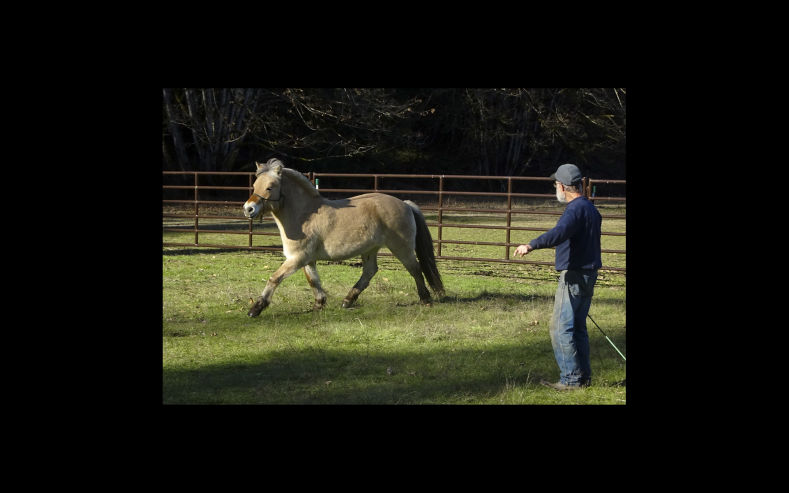 Hallie plays with Jim before a ride in the outdoor arena